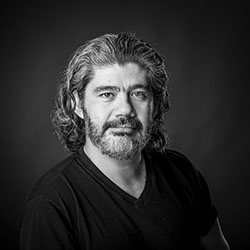 Rodrigo is a co-founder and Managing Partner at Expon Capital. He is a digital native, former strategy consultant, serial entrepreneur, and well-known business angel.

After earning his Computer Science Engineering degree at EPITA in Paris, France, he started his career working with industrial, banking, retail and media clients for two large consultancies (KPMG Consulting, Gemini Consulting) co-creating the Internet security, Internet strategy and online marketplaces practices. In the following 10 years, Rodrigo also led a number of digital strategy assignments as a free-lance consultant for public multi-billion revenue companies working closely with both the executive committees and CEOs, with clients such as AOL Europe, Capgemini and Darty.

After getting two MBAs (from the Sorbonne University, and later at INSEAD with an exchange term at The Wharton School), he co-founded in 2002 and later ran Glowria, a video-rental and VOD service, that quickly became #1 in France and #2 in Germany. In 2005, he also co-founded and ran vpod.tv, an award-winning multi-media content management software aimed at Fortune 500, with operations in France and Spain. Both had significant venture-capital financing and were acquired.

In 2009, he became an active business angel and startup mentor with a strong focus on consumers investing in companies such as Amiando*, Trigami*, GetAround, RecargaPay, ManifestCommerce*, Boostable*, Tribe*, Holberton School, Attach.io*, etc. (* = sold) He is a frequent speaker at events worldwide, a regular jury member at startup competitions and occasional lecturer in top graduate schools. Rodrigo has also participated in over 300 podcasts in the past 10 years (“French Connection” at LCI Radio, “On Refait Le Mac”), always commenting on the business side of technology.

His current areas of interest as an investor include messaging and communication services, education-related technologies, artificial intelligence tools, cybersecurity and Internet infrastructure.

In his spare time, Rodrigo is an avid traveler, B&W photographer, genealogist, wine enthusiast and enjoys opera, fine dining, biking and snowboarding. Rodrigo is a Chilean national, fluent in French, English and Spanish, and has working knowledge of German, Italian and Thai.