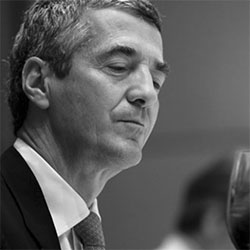 Eduardo Chadwick comes from a long line of entrepreneurs with a passion for wine and today carries on his family’s legacy. He joined Viña Errázuriz in 1983 after obtaining his degree in industrial engineering from the Catholic University of Chile. He set out to learn as much as he could about wine and went to the Institute of Oenology in Bordeaux to meet Emile Peynaud, considered the father of modern oenology. He also travelled to many more of the world’s wine regions to absorb the best techniques and put them to practice at home.

Today he is the winery’s President, and Viña Errázuriz is considered amongst the world’s finest by international critics and specialized media such as Decanter magazine, who described it as the “quality benchmark from Chile” in July 2005.

Eduardo has served on the boards of directors of Wines of Chile and is a member of the “Brotherhood of Wine Industry Merit”, which oversees the authenticity, quality, and image of Chilean wine

In 2017 he received the highest award granted by the Chilean Food and Wine Writers Association, the “Rosita Robinovitch” award, a distinction granted each year to acknowledge personalities who stand out for their prominent professional goals.

He has long been an active ambassador for Chilean wines around the world. He and his team have travelled the world for decades promoting the quality and potential of Chilean wine and offering a series of annual seminars on different aspects of national terroir, viticulture, and wine.

In 2004 he hit upon a winning strategy for drawing attention to the potential of Chilean wine: a very special blind tasting held in Berlin where he pitted his top Cabernets against the world famous Grand Crus of Bordeaux and some Super Tuscans. The results surprised everyone…and the future of Chilean wine was to change forever.

Most recently, Eduardo Chadwick was awarded the prestigious title of “Decanter Man of the Year” for devoting his life to the service of fine wine and recognized excellence in the wine world.