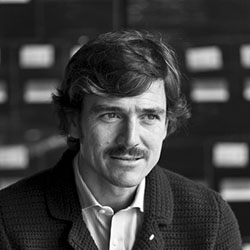 Andrea Lonardi was born in Valpolicella in 1974, but he did not remain in the region. He attended University in Bologna, receiving a degree in Agriculture, and thereafter, he obtained his Master’s degree from the Grande Ecole di Montpellier, in control and management. He then started to work at Washington State University, completing internships in Languedoc and Sonoma.

He returned to Italy in 2003 where he began his career in marketing and sales, at the top wine division at the Gruppo Italiano Vini. In 2005 he was offered an ambitious project, the reorganization of the vine-growing part of the group that led him to work as their Group Wine Coordinator in the most important Italian wine-growing areas; here he would come to work with over 1000 hectares of vineyards from the Alps to Sicily. In 2008 he was also entrusted with the management of two of the Group’s wineries, in order to support the development of the product portfolio and image.

By 2012 he was ready for an important change and assumed the role of Chief Operating Officer within the newly formed Bertani Domains. In BD he was responsible for production reorganization, the development of the group concept; the construction of the product portfolio and the development of the business. He alternates between vineyards, wineries, marketing and markets; this is possible because of his dynamic and strong stye, his product oriented approach.

He has been a Master of Wine student wince 2014, this experience that has led him to deepen his network and expand his interest in trade-marketing within the world of fine wines.

Andrea has managed apply innovation to his profession by taking part in continuous training cycles, actively collaborating with UIV as well as the most important research centers. He is also an Advisor on the boards of the Consortia of Valpolicella and Vino Nobile (in which he is developing an ambitious project to relaunch the denomination).

In Lonardi’s private life, he is a father of two beautiful girls and a passionate collector of Art Brut (‘raw art’), as well as an avid runner.