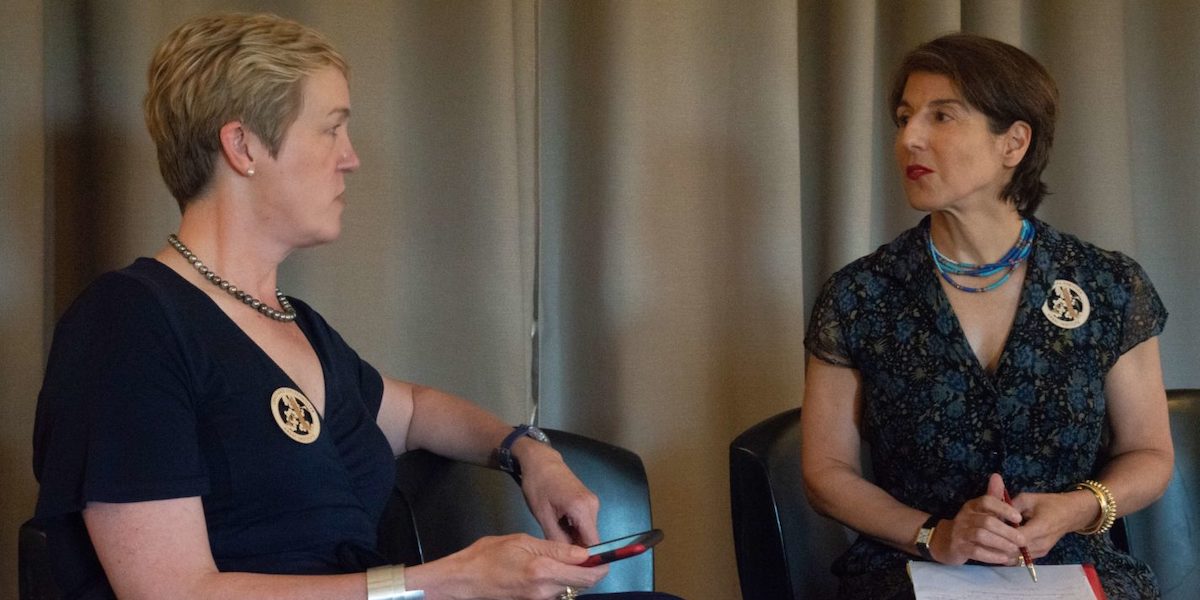 Dr. Constanze Stelzenmüller is a Senior Fellow in the Center on the United States and Europe at the Brookings Institution in Washington, DC. Her areas of expertise include transatlantic relations, German foreign policy, NATO, the European Union’s foreign security and defence policy, international law, and human rights.

Karina Robinson: Constanze, you mentioned earlier today that we were facing the most severe crisis between the US and Europe in your working lifetime. Why is that?

I can see two main forces of global disruption happening at the same time.

We are witnessing a fragmentation and tribalisation of global politics, at the same time that economic and technological integration is deepening. The friction that those combined forces creates is nothing that I have seen in my professional lifetime – and I used to report from war zones.

In the meantime, we are seeing a weaponisation of economic interdependence by the Trump administration, and retaliation by both the Chinese and the EU. Sanctions and tariffs have indeed been used before, but never in this quantity and quality, nor with such extreme goals, with the other party (e.g. the Iranian regime) not being able to fold without totally losing face or power. So much of US foreign policy is inconsistent and badly thought through.

Karina: And what does all of this mean for us, regular citizens and trade people?

The result of all this is a tremendous increase of volatility, instability, unpredictability and a genuine risk of miscalculation – mistaken assessments — by the challengers and adversaries of the West. And that increases the risk of “kinetic encounters“;in other words, of war[1].

But to my mind, the culture war framing is even worse than the security policy brinksmanship[2] or the weaponization of economic interdependence. Some (not all) of the trade nationalists and the security nationalists are also ideological hard liners. They think of the current moment in terms of some sort of millennial Judaeo-Christian crusade. It is this which makes our transatlantic trade and security disputes so toxic, and it also helps weaponise the populists in Europe and elsewhere. It turns trade war into an emotional drama, transforming economic and social issues into secular fights that “normal people” can get engaged with, and enraged by.. I see policy makers and governments really struggling with all this in a way that I have never seen before.

I am genuinely worried that we will have wars not by design but by mistake.

Karina: What about the European Union in all of this? We do have the single market, but we don’t have significant security resources and we have undefendable borders. We are surrounded by Northern Africa, the Middle East, Eastern Europe and Russia, and in the middle of two great powers, America and China. What is our place? Our role in all of this?

The only way in which we Europeans are a great power is in trade and regulation. But in this field, we really can compete with the other great powers. We sometimes underestimate that. But if we divide ourselves politically, we won’t be a great power even in the economic arena.

Some self-criticism is warranted here. Some of us (certainly that’s true for many Germans) mis-learned the lesson of 1989. There was a general feeling that the West had won, democracy had won, communism was over and everybody was going to want to be like us and the middle class would flourish and span the globe. Now we see how dangerous it is to take hard-won rights and freedoms for granted.

In fact, we now see democracy and constitutionalism challenged even within the West. Populists and extreme right-wing movements are challenging and trying to undermine the functioning of governments. The lesson is that democracy can self-destruct if we don’t take care of it. The same is true of our market economies and our social contracts. We risk seeing these great civilizational achievements of the 20th century falling apart before our eyes. Once they are damaged or destroyed, it will be very hard to get them back. So we need to defend them, and perhaps make them more robust as we enter an age of great political, economic, and social stress.

As Americans say: if you are not at the table then you are on the menu. Only by making sure that our democracies are in good working order can we legitimately suggest to others that our model might be one worth following.

[1] With blood being shed

[2] The art or practice of pursuing a dangerous policy to the limits of safety before stopping, especially in politics.