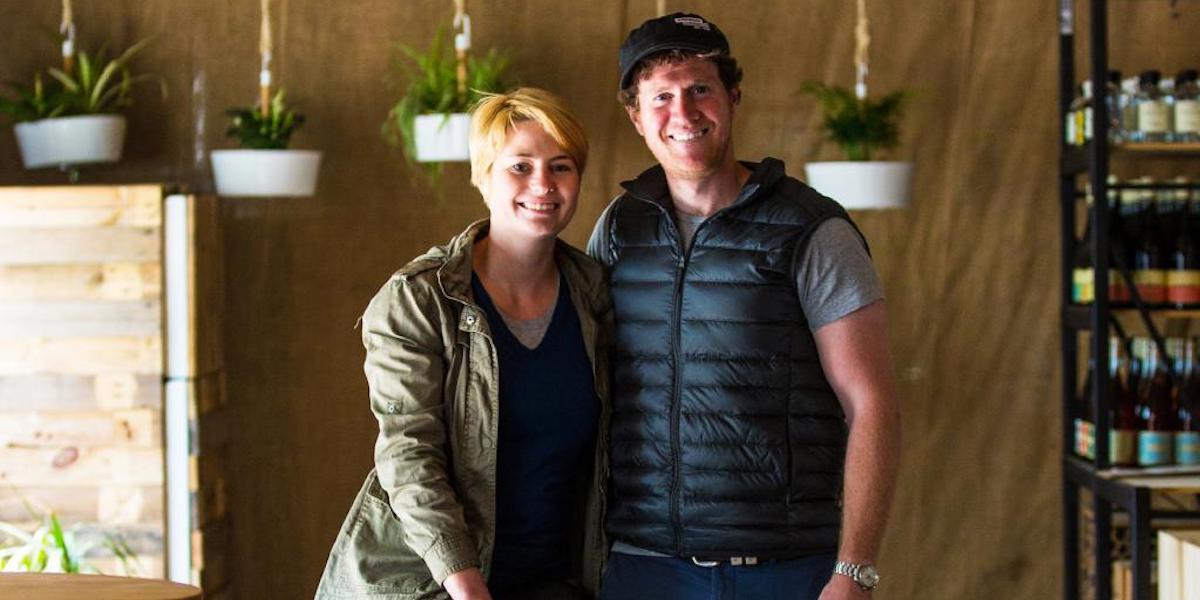 Brendan and Laura Carter are an Australian winemaking couple with a passion for the soil of their country. That passion has driven them to reconsider the business model of the typical wine producer. While they operate a for-profit winery, Unico Zelo, in the Adelaide Hills, this is only one part of three separate businesses.

The Carters take a unique angle: for Unico Zelo they eschew the traditional grape varieties that have put Australia on the map, such as Shiraz, and instead focus on Italian varieties Fiano and Nero d’Avola, which they believe are better suited to their climate. While they believe this results in better quality wine, it is also more environmentally sustainable as these grapes can be dry-farmed, use less water and are more expressive of Australian soils.

Brendan is frustrated to see that most wineries – and research conducted in Australia – focus on fixing or manipulating the grapes that are already planted rather than re-planting with grapes that are simply better suited.

However, growers are at a severe disadvantage, as theytend to see less than 10% of the profits from a wine flow back to them. In addition, they are typically at the mercy of large wineries who often don’t pay on time, pull out of annual contracts at the last minute and leave growers scrambling to find new customers or accept a far lower price out of sheer desperation.

Harvest is the second arm of the Carter’s ecosystem, a social cooperative whose mission is to return 50% of the profits back to the growers and reinvest the remainder into interest-free loans to help fund further innovation projects. It works like this: Any grower within a 10km radius of Unico Zelo can drop off their grapes for free and the Carters will make them into wine. These wines, which focus more on “traditional” grape varieties grown in Australia and are made to consumer style preferences, are sold through the same distribution pipeline as Unico Zelo. Whatever profit is made, 50% of that goes directly back to the growers.

It’s a shift in thinking for farmers who aren’t used to such a model, but if they are willing to take a chance on the Carters, the result is that they are paid faster and, on average, four times better than a traditional contract. In fact, with Harvest there’s no contract at all; it’s simply an option that’s there for growers who are looking for an alternative home for their fruit. They are under no obligation to come back year after year. Sharing resources with Unico Zelo also reduces packaging costs by a third, further increasing profits for the growers. To date, Harvest works with 17 growers. It may not be high volumes, but it is high value.

The third arm of the business may sound like a stretch, but Brendan ensures it’s not. Applewood Distillery makes use of any lower quality grapes that growers drop off, using it to make spirits. They then pay the growers the highest commercial price they were offered for the fruit. Ultimately, they never want to turn a grower away.

While they did look at white labelling as an option, that model simply didn’t feel right to them.

“This is where I’m maybe a little bit of a dreamer,” says Brendan. “There’s something about a brand that unites people. Rather than adding a slew of more no name brands, I’d much prefer to create one really strong brand with the backing and support of all of our growers – and give them an icon they can believe in.”

With Harvest, the Carters want to be the largest producer that delivers growers fair profit in Australia.

“If we are this good, why wouldn’t we end up controlling the supply?” asks Brendan. “With the growers directing it, actually a part of it? That’s the big dream with Harvest. It’s a different set of rules. We want to build a robust business model that protects itself from greed. Of course, we need to be pro-profit – just not too much.”

As a Certified B Corporation, the Carters themselves cannot make a salary more than 20% higher than the lowest paid employee on their payroll. As such, the only way to increase profits is to increase the pie for all. Having started this business with their own A$5,000 ($3,438) investment in 2013, they are now turning over more than A$4 million annually, 99% of which is getting re-invested into the business. The Carters say they don’t have an exit strategy, but rather an investment strategy, and they see this business model as long term.

“Our mission is to make this so successful that we move governments in a positive direction,” says Brendan. And he’s an open book, happy to share literally any intellectual property he has if it means this mission will be a success.

So far, they’re making progress on an environmental sustainability front with Unico Zelo, a financial sustainability front with Harvest and, even on a social sustainability front, among growers. In a community that was once competitive, growers are now working together with Harvest toward a common goal, and this is turning competition into friendship. The next step is to establish a board of directors for Harvest, bring in some outside counsel for formalising the business model and create forecasts for future sales growth. Since Harvest began in 2015, only four growers have made use of the loans. But the Carters are hoping more wineries will use these to replant better varieties and pursue other initiatives to further support financial, environmental and social sustainability in the Australian wine industry.