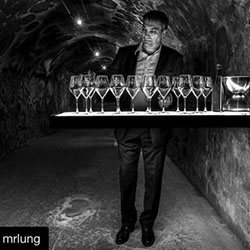 Champagne possibly wasn’t coursing through Sébastien Walasiak’s veins at birth, but it was certainly in the air he breathed, the water he drank, and in the soil stomped on at the farm his Polish émigré parents tended near Oger. Born in Epernay in 1966, Sébastien, grew up doing the things a boy in the countryside does, exploring nature, swimming, fishing, biking…and he was a big reader, fascinated by history, and especially the people who made it such as Talleyrand and Clemenceau. He thought of becoming an historian. Or, perhaps an archeologist, unearthing previous human civilizations.

That idea changed when his went to high school in Avize – a famous lycée dedicated to viticulture that was attended by many vinegrower’s kids. He made fast friends and became further immersed in grape growing and oenology. It was nearly inevitable, therefore, that he would find himself working in the wine industry immediately upon graduation.

Sébastien started off at Warris & Chenayer, a now defunct Champagne house, working both in the vineyards and the winery. He decided he preferred winemaking to winegrowing and jumped at the chance to work at the test cellars of the Comité Interprofessionnel du vin de Champagne (CIVC), Champagne’s governing body, followed by a stint at Champagne Delamotte.

After a year of mandatory military service, Sébastien returned to the world of wine, joining the ranks of Champagne Pommery in 1988. There, he worked as a cellar operator until 1993, learning from such eminences as Alain de Polignac and Thierry Gasco. Wishing to expand his horizons, Walasiak took a sabbatical to complete a course in oenology as well as to intern abroad, going to Morton Estate in New Zealand. While he was there only three months, he was deeply impressed both by the number of grape varieties and the fact that people grew vines all over the country. Sébastien was also fascinated by the possibility of making so many different types of wines in one single estate, something that is not permitted under French law. The openness of people, their capacity to innovate and adapt, their curiosity fascinated him and allowed for some exceptional tastings. While he was very tempted to remain in New Zealand, he was still under contract with Champagne Pommery and returned home.

In 1994, Walasiak joined the Coopérative Générale des Vignerons (COGEVI), the oldest cooperative in the region, becoming cellar manager for the co-op’s flagship brand, Champagne Collet. He didn’t know it at the time, but COGEVI was on the cusp of a dramatic growth due to the arrival of Jacques Marquette as President the following year and Patrick Cercellier as Director in 2001, followed by Olivier Charriaud in 2012. Indeed, within twenty years, grape sources – including from fully half of the region’s Premier and Grand cru classified vineyards, tripled, and an additional, state of the art winery was built in Oger. Among the innovations was the arrival of 200 tanks that allowed for micro-vinifications, a tool Sébastien has not been shy to use over the years especially since he became the official Cellar Master in 2011. And, thanks to the increasing arrival of grapes from some of the best quality crus of the region, Walasiak has been able to make wines of ever increasing quality for Collet.

The stellar reputation of COGEVI, its financial stability, its unrelenting sense of duty vis à vis the Champagne grower community, and its location at heart of Aÿ, one the finest Grand crus, have all been factors that work in his favor. “Today, I have access to 160 of the 320 crus of the region,“ proudly says Walasiak

Still, not content with relying solely on the reputation of his grape sources, Sébastien has established a quality charter that growers must abide to. For one thing, growers – who often press their own grapes and deliver the must to the winery – are required to separate their pressed juice into first and second batches. Walasiak vinifies each separately, allowing him to decide which best suits the particular cuvées he assembles later after intense rounds of tastings. This method affords him the opportunity to experiment, to play really, creating wines that express a personality of their own, that are more delicate. A single parcel of Pinot Meunier planted in 1921 by the predecessors of a fourth generation grower in the Marne Valley (coincidentally, the year Champagne Collet was created) might result in two barrels of a still white “blanc de noir” wine, creating a very unusual Côteaux Champenois Blanc.

With his years of experience at Collet, Walasiak describes with confidence the style of wine he is most interested in achieving: the sort of Champagne that lingers on the palate long after you taste it, calling for more. For him, this means a wine that is round, without rough edges and has a long elegant finish. He ages his cuvées on the lees longer than average (4 years minimum and up to 10 years) allowing him to apply a lighter touch in dosage to counter-balance acidity and letting a wine’s intrinsic qualities to shine. Longer aging also facilitates more complexity, allowing spent yeasts to interact with the wine through the process of autolysis, adding layer upon layer of complexity. In recent years, Champagne Collet has been willing to develop its prestige cuvée called Esprit Couture, a challenge Sébastien is all too happy to undertake. In 2012, he also started a new blend that will be available in the market as of 2021 or so, just in time to celebrate the house’s Centennial year. But recently, Sébastien also contributed to the creation of a few new cuvees, with the full support from Collet’s management team. In 2014, he expressed the desire to make Côteaux Champenois Rouge with a Pinot Noir parcel called La “Porte aux Brebis” and a Côteaux Champenois Blanc from the previously mentioned Pinot Meunier parcel based in Epernay dating back to 1921. These 2 wines are still wines. With the harvest of 2013, he created a new Blanc de Noir Champagne with Pinot Noir and Pinot Meunier that will be realease this year (2017); he will continue to innovate with a Champagne made solely from one Pinot Noir planted, Grand Cru parcel in AY called “la Côte du Moulin” which will come out in 2020.

“I am very proud to say that I have spent the last 23 years at the service of this amazing Champagne House,” says Walasiak. “I was able to witness its most important time of growth, both in quality and reputation and today am grateful that they allow my creativity to express itself in the form of new cuvées.”