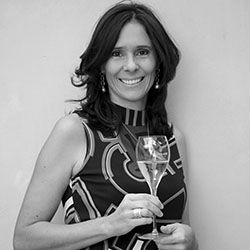 Daughter of Mauro, who was for many years Ferrari’s chief oenologist, Camilla gained experience during her University studies, first in Paris at Banque Paribas and subsequently in New York at Unicef. After graduating with honours at Bocconi University in Milan, she took her first professional steps in strategic consulting with Deloitte Consulting.

Two years later Camilla Lunelli was hired by the United Nations, specifically by UNDP – United Nations Development Program, and posted to Niger, one of the world’s poorest countries, to supervise a socioeconomic rehabilitation program for ex rebels. In 2003 she transferred to Uganda on behalf of a non-governmental organization to follow emergency aid projects for the victims of the war in the north of the country.

After three years in Africa, Camilla returned to Italy and in 2004 joined the family business. With her cousins Matteo and Marcello and her brother Alessandro, she now represents the third generation of the Lunelli family at the helm of Ferrari, and carries forward the dream of promoting Ferrari throughout the world as a symbol of the Italian Art of Living.